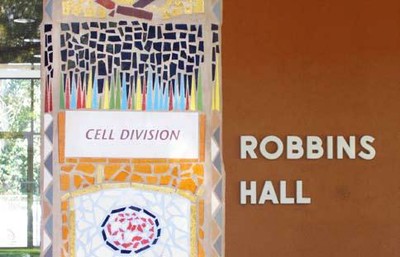 In 2007, the Plant Genomics Program partnered with local artist Donna Billick, director of Billick Rock Art, to create ceramic mosaic murals on the exterior columns of UCD’s Robbins Hall to reflect the academic activities within. Resident groups include the Plant Genomics Program, the Weed Research and Information Center and the Agricultural Sustainability Institute.

This project is part of the larger campus-wide GATEways (Gardens, Art, and The Environment) initiative, whose task force was chaired by Pamela Ronald. One of the goals of the GATEways project is to use art, gardens, exhibits, outdoor teaching spaces and events to engage the broader community in the work and scholarship of UC Davis.

The PGP is grateful to the UC Davis Art/Science Fusion program (of which Billick is co-founder) for its contribution of time and technique and to Carmia Feldman, assistant director of the UC Davis Arboretum, for her assistance. 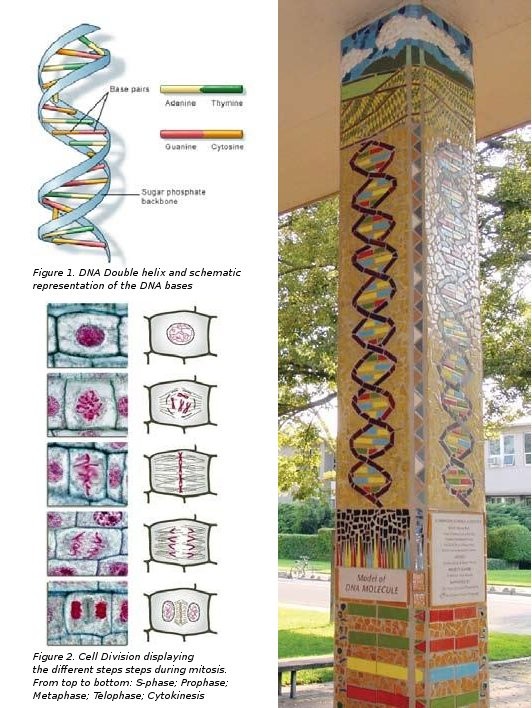 xyribonucleic acid (DNA) encodes information needed for biological functions. DNA is a language, in which the chemical bases that make the DNA strand are the alphabet letters and the genes are the words that make the language readable and translatable. All organisms share the same alphabetic properties (DNA) but make up their own language as they play with different set of words (genes). This column depicts the chemical nature of the DNA molecule, how the DNA bases that make the DNA strand fit together and how the information is conserved and passed on to the next generation. In the top part of the column the DNA strand is displayed as a double helix of two chains composed of nucleotides that run anti-parallel to each other and are connected throughout its length. The polymer backbone is composed of sugars linked to each other by phosphate groups (the brown ribbon) and the bases (represented here by the color rectangles) (refer to Fig1). The bottom of the column gives a detailed representation of the chemical structure, with phosphate groups and sugars represented as small black dots and dashes in the corners. The bases are the colorful connecting rectangles. The colors used in the double helix above are the same as the ones used in the mosaic below. This is not by chance. The four available bases (adenine, thymine, cytosine and guanine) that make up the DNA strand pair in specific ways. Adenine pairs with thymine only and cytosine pairs with guanine only. The DNA sequence (ATGCATAÖ) is decoded by a method called sequencing. The chromatogram shown on the column displays the different colored peaks in the correct sequence of bases. The set of five small panels on the bottom of the column display the process of cell division (Fig2). First the DNA content is doubled so the daughter cell posesses a copy of DNA (S-Phase). After DNA is copied it condenses and the chromosomes become visible (Prophase). They align at the middle plane of the cell (metaphase) and then they separate to the poles of the cells (anaphase). Each of the poles of the cell contains one copy of the whole genome of the cells so when the cell divides in two, (cytokinesis), both the mother and daughter cells have the same genetic material. This is how the information is passed through DNA to the descendants. 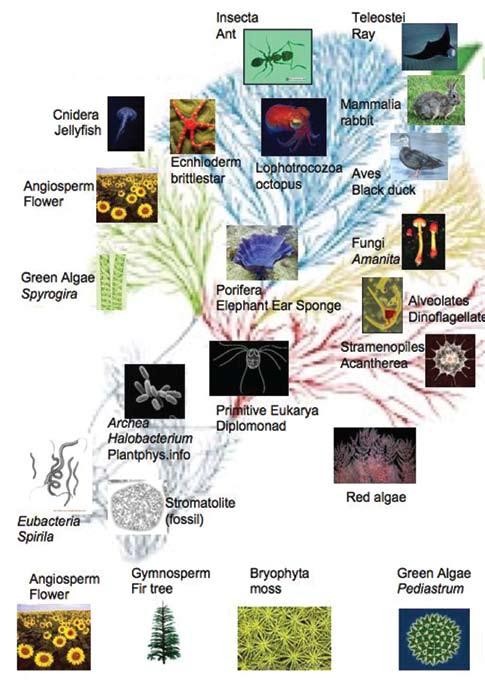 Evolution is a process that results in heritable changes in a population spread over many generations. Eventually, with enough time and selective pressure for change, a new species will evolve that cannot mate with the old type of organisms. Through evolution, all living things are related to one another by sharing similar genetic material. The Evolution column is composed of three related images, the plant phylogeny at the base, the “Tree of Life” in the center, and a landscape at the top of the column from which the process of evolution proceeds.

At the base of the column is the green plant (Viridaeplantae) of the phylogenetic tree. Phylogenetic trees are used to represent the process of evolution; their branches (black lines) depict the historical relationships between organisms. Cesar Chavez elementary students built the panels at the base of the column to show the following four major groups of green plants: green algae, bryophytes, gymnosperms, and flowering plants. The most primitive class of green plants are the green algae, represented by a colony of the organism Pediastrum. From green algae, land plants evolved, the most simple of which are represented by a panel showing moss. From the primitive land plants, more complex plants with protected seeds evolved, represented by a pine tree. Finally, flowering plants are represented by a pink flower.

The central image of the column is the Tree of Life, which depicts the evolutionary history, or phylogeny, of all life on Earth. The design for the image is from the Tree of Life Web Project (www.tolweb.org), a collaborative project with the goal of compiling information on, and describing, the evolutionary relationships between all organisms. On the Tree of Life, existing organisms are like leaves at the end of branches. The branch to which each organism is attached represents the history of that organism. Therefore, neighboring organisms on twigs that attach to the same branch are similar to each other. Another feature of the Tree of Life is that less complex organisms are located closer to the roots at the bottom of the tree. 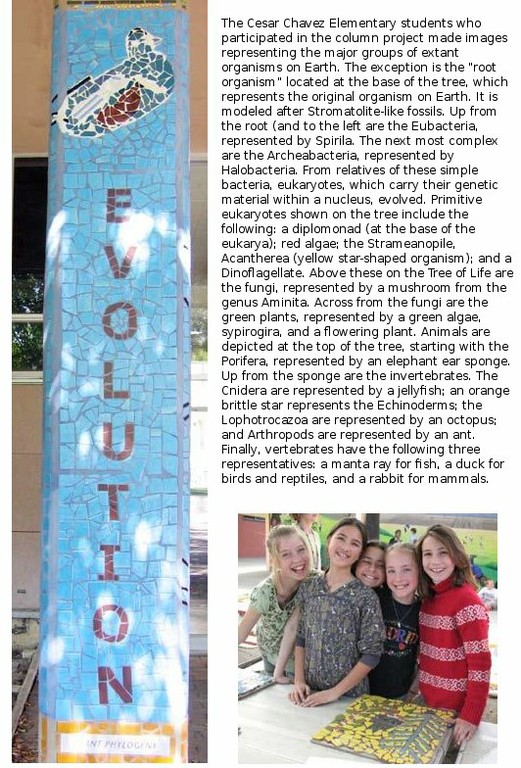 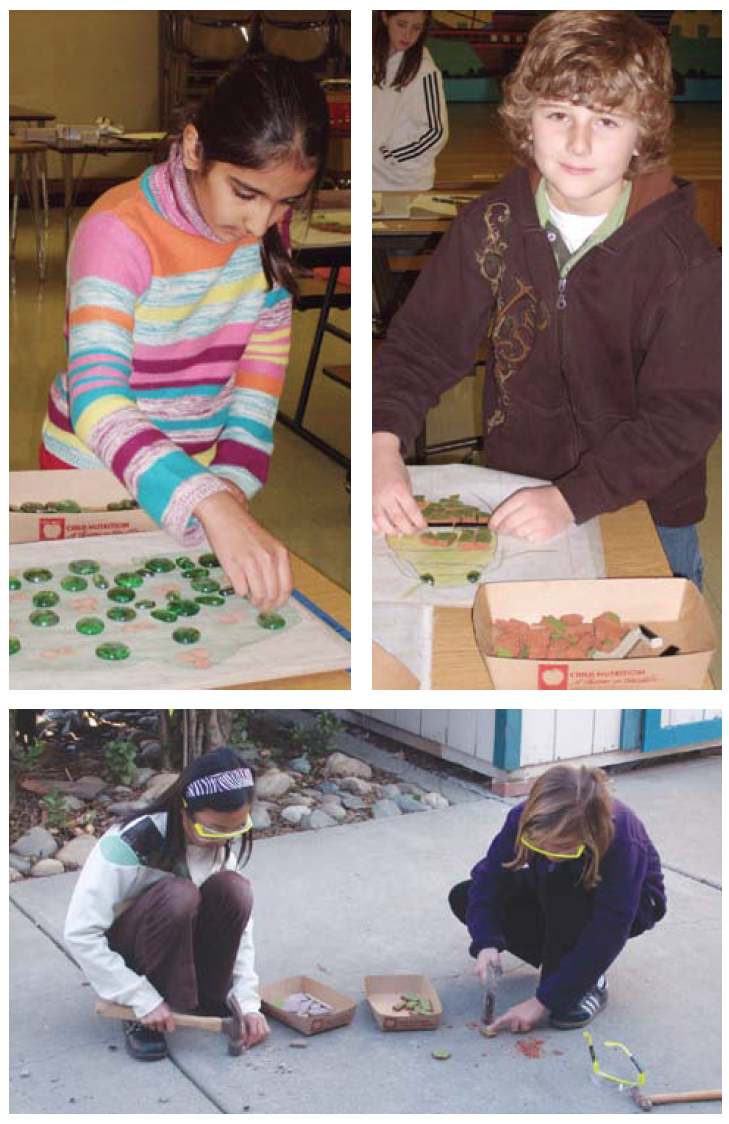 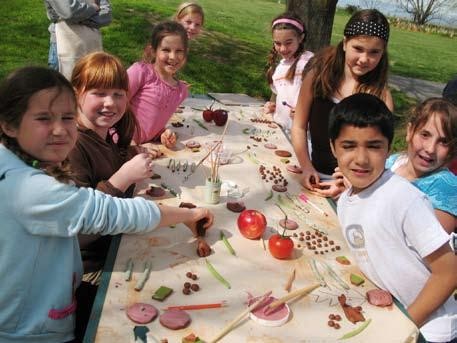 This column represents four plant-based food groups that provide essential nutrients: corn for carbohydrates and oils, beans/legumes for proteins and tomatoes and apples, representing fruits and vegetables, for vitamins, fiber, minerals, etc. Complete meals can be made from these four crops. They are all grown locally as well as throughout California and the world. The cornucopia at the top of each face is receiving bounty from these plants and showering it on us. 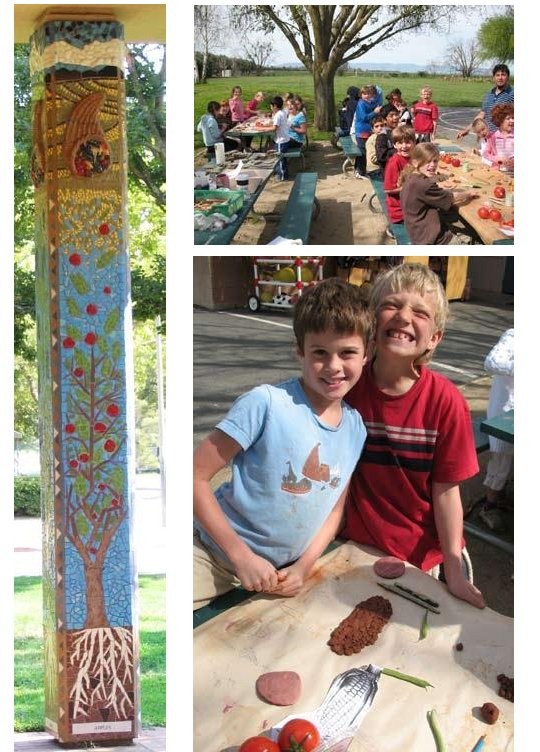 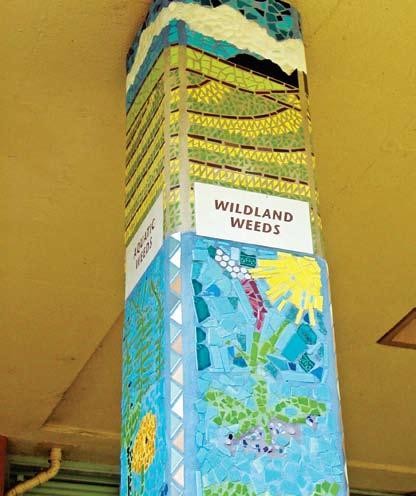 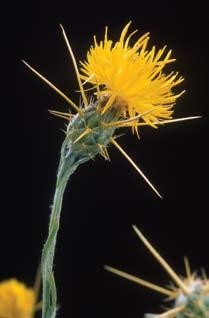 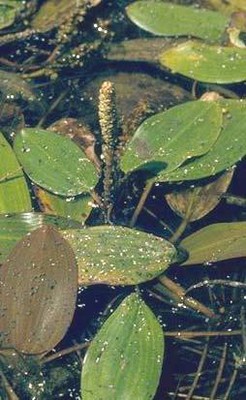 The UC Davis Weed Research and Information Center conducts basic and applied weed research and extension programs in partnership with California growers, agricultural industry, and public agencies. Weeds are native and non-native plants that negatively impact crop production, cause health problems, or are aesthetically unpleasing in urban landscapes. Invasive plants are a group of non-native weeds that infest natural ecosystems. Some people call weeds “plants out of place,” but to farmers, conservationists, land managers and homeowners, weeds can be extremely problematic.
This weed science column depicts a subset of California's weeds and invasive plants and some methods for controlling them. The four sides of Star Thistle the column display four main groups of weeds: aquatic weeds, agricultural weeds, wildland weeds, and urban weeds. The top of the mosaic displays examples of weeds you will encounter throughout the state. The bottom shows ways to control or eradicate weeds. For more information about these weeds and how to control them visit: http://www.ipm.ucdavis.edu/ and http://www.cal-ipc.org/.
Rather than waiting for a weed to become problematic, it is always better to prevent potential weeds from entering an area and becoming established. To do this, familiarize yourself with known weeds, avoid planting them, and be careful not to transport their reproductive structures to a new area. Once weeds are established, the most economical and effective means of controlling them is an integrated approach utilizing several methods, including hand-weeding and cultivation, prescribed burning, mowing, herbicides, and biological controls.

This column depicts one of the central concepts of plant pathology, the “Disease Triangle.” Each side of the disea

se triangle represents an important component of disease development: the Host, the Pathogen and the Environment. Each component needs to be considered when developing appropriate disease control methods.

Below the disease triangle, some common plant diseases are shown. Viewers can see a healthy plant, a diseased plant, the disease agent and an image of a factor that contributes to disease development. The diseases are, from top to bottom: 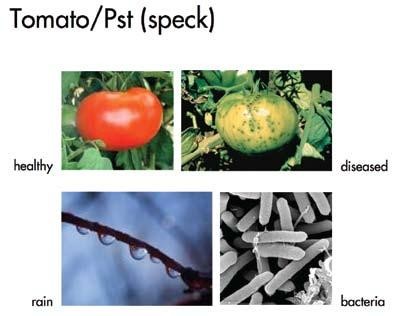 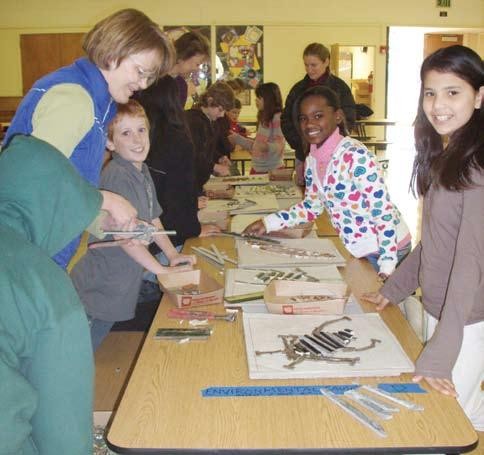 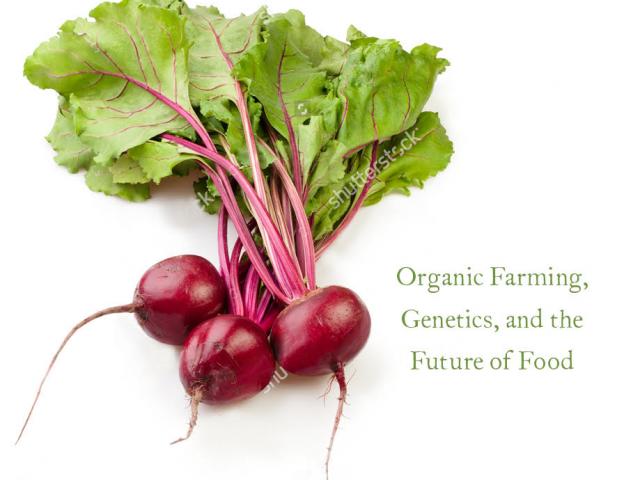 TED: The Case for Engineering Our Food